Is This Any Way to Run a Restoration Company?

How Can You Be the Best Service-Based Company?

A lesson in excellence

I’m not easily impressed by service companies. In fact, after being disappointed in the way most service companies perform, I’ve come to expect very little. However, I recently had the opportunity to do business with a company every service-based operation should consider copying. This company was the model of the type of professionalism, quality, and consistency you just wish every company would emulate. On top of that, they were the least expensive option available, which is odd, because I NEVER go with the lowest bidder (just as a matter of principle). What’s also interesting is that I knew these guys would perform right from the start.

Let’s back up. The company I’m referring to applies epoxy coatings to concrete floors. You know—the type of coatings neat freaks like me have applied to their garage floors just because. After all, you wouldn’t want to park your 1984 Yugo on just any floor, right?! I’ve either epoxied or had someone else epoxy every garage floor I’ve had for the past twenty-five years. At one time, I actually decided it would be a good idea for the restoration business I owned to offer this service, so I happen to be knowledgeable about the subject. But this isn’t about the epoxy. It’s about the company, the brand, and the people who applied the epoxy and what a class act they were.

So, when, exactly, did I think the job they would perform might be good? I got that feeling when I first saw their website. It was professional, easy to navigate, and easy for me to find the information I was looking for while not being overstated. To add some consistency to the mix, their salesman was no-nonsense, straightforward, confident, and extremely helpful—just like their website. 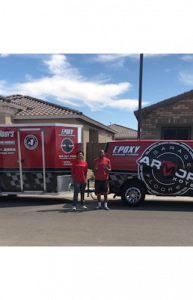 After booking the appointment, my confidence grew when the salesman sent me an email detailing everything to expect from his team on the day the work would be performed. The email also gave clear details regarding what was expected of me, like having everything off the floor. The information told me what to do, but it also told me what NOT to do, like washing the concrete slab prior to their arrival, as water could create adhesion problems for the epoxy.

The confirmation email I received the night before the work was scheduled only served to reinforce my growing faith in this company. On the day the work was to be done, I didn’t have to guess who was turning the corner onto my street. Their truck and enclosed trailer looked just like their website, further reinforcing the consistency of their brand. When the truck pulled up in front of my house, the young man on the passenger side exited the truck with a smile on his face and walked directly toward me. When he got close, he stuck his hand out and said, “Good Morning, Bill! It’s nice to meet you! As soon as we have the truck and trailer secured, we’ll explain what we’ll be doing today.” When the truck and trailer were parked, the driver hopped out and introduced himself the same way, with a smile on his face and addressing me by name. As the passenger began unloading the equipment, the driver explained the process, making sure I understood what they were applying, how they were going to do so, and ensuring that they had the right color. I couldn’t help but think to myself, “Holy smokes, these guys are well trained!” It didn’t hurt that they actually showed up on time, either!

At this stage, I already knew the job would be perfect. This was a well-choreographed performance where everyone clearly had rehearsed and knew their part. The end result was sure to simply be a by-product of the professionalism, quality, and consistency that I had already experienced. After all, the appearance of the website, the salesman’s no-nonsense approach to the sale, the clean and consistently logoed equipment, the well-trained professional crew, and the clearly stated expectations along the way could not lead me to expect anything less than an outstanding job.

After the second coat was applied, the young men performing the work let me and my wife know that they were going to lunch while that coat dried. What they did next was something I’ve never experienced from a service company—the technicians asked us if THEY could bring US lunch! In my entire life, I’ve never had someone working in or on my home offer to feed me.

The rest of the story goes exactly how you would expect—the job was perfect. In fact, it was substantially better than my company used to produce, and I thought we were outstanding at what we did. There were no telltale signs that they had even been there that day, other than the fact that I now had a beautiful new garage floor. No dust, no trash, nothing other than my beautiful new floor. But they weren’t done yet. The technicians exited with the same class they displayed upon arrival, making certain that my wife and I were totally satisfied with the work they had done before leaving.

The next day, I received an email from the salesman wanting to make sure I was 100% satisfied, offering to fix anything I wasn’t happy about, and asking for a review of their work. I thought to myself, “I won’t write a review. I think I’ll write a magazine article about them instead.”

As a side note, being a consultant to a service-based industry, I had to ask the two technicians what drove them to do such a great job. I asked if it was money, then asked each of them how they were paid, thinking they must be getting a percentage of the job to display such enthusiasm and professionalism. Nope. Both the crew chief and the technician were paid wages similar to what’s paid in the restoration industry. I asked what their plans were for the future and the technician said, “I want his job,” pointing to the crew chief. “I want to drive the truck and operate the diamond grinder.” The crew chief said, “I want to be a supervisor or maybe even start my own company someday.” I asked the crew chief if he would leave if another company offered him more money. He thought for a minute and then said, “No. I don’t want to work anywhere else. We’re the best, and money isn’t everything. There’s a good feeling that comes from working for the best.” I couldn’t have said it better.

How Much Does a Restoration Business Consultant Cost: Consulting Fees and Pricing Structure?

Enrich your life
Elevate your business